Please feel free to submit a comment about any story appearing in our newspaper or anything happening in our community. Your name is not required, and we recommend creating a Username. If you do give your name, it will not be posted unless it can be verified, and E-mail addresses will not be posted.  We reserve the right to delete any comment from the forum. No malicious, slanderous or libelous comments will be posted. Please limit your comments to 100 words. Longer comments may be submitted as a Letter-to-the-Editor to P.O. Box 40, Fitzgerald GA 31750 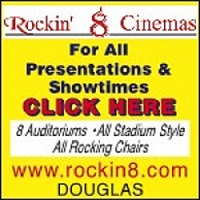